The character below is a template that I have completed in an effort to practice what this blog is preeching. 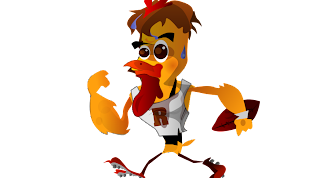 Character designing (for Animation) is one of the subjects I want this blog to be centered on. I've been trying hard to follow the trends on how cartoon/ comic characters are being designed today. Growing up Sonic was one of my absolute favourite cartoon characters. Nowadays animal templates (like blue hedgehogs) are not as dominant as in the great 90s. Morden animators had revived animal leads as is the case with Finding Nemo, but human characters still dominate with Ben 10, and Dora the explorer coming to mind.

Some might argue that the aliens that Ben ten(s) into are representing the opressed creature population. Personally I think more animators should ignore the obvious and create stories that have out of this world beings. Talking chickens, handsome hyenas, and anything else mother nature gave us land, sea or airborne creatures, with all their shapes and sizes. I end this first blog by saying that as a designer/ animator the ball is now in your court. Grab it and run!!!

The 'Athletic Chicken' above shall be one of my next Downloads for Toon Boom and Anime Studio users who visit http://www.totally2d.org/ Once its rigged it'll be available
Posted by theTafadzwa at 16:28